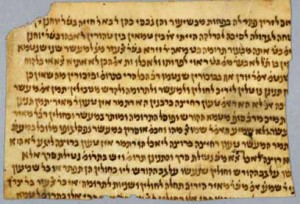 It’s written in the Talmud: ” Since the Temple was destroyed, prophecy has been taken from prophets and given to fools and children.”

How to understand the Talmud – according to Monsieur Chouchani

“The fundamental principle is reported by Levinas in the name of his teacher, Chouchani: “One does not have to construct nor speculate abstractly, but through imagination.” On this are based the following assumptions:
1. Reading Talmud requires sensitivity to images, ideas, reactions, random thoughts, even distractions, that occur in the process of reading.
2. Reading Talmud requires asking questions, permitted or not.
3. The Talmud should be read aloud to approximate an oral tradition.
4. The Talmud is to be taken as a whole.
5. The Talmud is part of the story of the encounter between Israel and the “Nameless Being.” This encounter precludes a sensibility of oppression.
6. Although historical and scientific information is essential for a proper reading of the Talmud, such information must be subject to the same images, ideas, reactions, random thoughts, even distractions and – especially – questions as the text.
7. The mention of “Israel” means human being. As Levinas wrote:
Each time Israel is mentioned in the Talmud one is free, certainly, to understand by it a particular ethnic group which is probably fulfilling an incomparable destiny. But to interpret in this manner would be to reduce the general principle in the idea enunciated in the Talmudic passage, would be to forget that Israel means a people who has received the Law and, as a result, a human nature which has reached the fullness of its responsibilities and of its self-consciousness… the heirs of Abraham are all nations; any man truly man is no doubt of the line of Abraham.”

In “Reading Levinas/Reading Talmud: An Introduction”
By Ira F. Stone